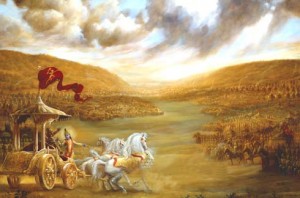 What has a king to teach us on Leadership ? And a King who lived more than 5000 years ago ?

I recently spend time in India in the state of Karnataka.

On my way back, while waiting at the airport, I bought a book on leadership which I read on the plane. And I found the story told in the introduction very interesting as it manages to convey some meaningful lessons on leadership, even in its simplicity.

This is the story of the commander-in-chief of the Kauravas, named Bhishma, who fought against the Pandavas , in a battle depicted in the Mahabharata, one of the most well known Indian scripture. That battle was won by the Pandavas, and Bhishma was found dying on the battlefield. He was 116 years old, and respected by both sides.

As the Mahabharata describes it, Krishna, the divine adviser of the Pandavas, asked Bhishma to teach the Pandavas the art of leadership so that he could now rule the vast kingdom he had won in battle.

In whispers, the king said those 4 things :

Interestingly, very little here is said about skills or knowledge.
No that they are not important. But what the above suggests is that in the end it all comes down to the leader’s character.
The book then goes on on how to develop the necessary strength of character so that leaders can indeed act effectively.

How much would you say character is a prevailing trait of great leaders ?