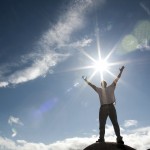 When trust replaces fear, when we are less attached to our ego (as seen in my previous post), when we feel more connected to others and to a purpose, will a hierarchical pyramid still provide the best organizational structure?
From a Teal perspective, the right question is not: how can everyone have equal power? It is rather: how can everyone be powerful? Power is not viewed as a zero-sum game, where the power I have is necessarily power taken away from you.

The challenge with pyramid structure is well described by Frederic Laloux in his book :

The concentration of power at the top, separating colleagues into the powerful and the powerless, brings with it problems that have plagued organizations for as long as we can remember. Power in organizations is seen as a scarce commodity worth fighting for. This situation invariably brings out the shadowy side of human nature: personal ambition, politics, mistrust, fear, and greed. At the bottom of organizations, it often evokes the twin brothers of powerlessness: resignation and resentment.”

And the devastating effect of this unequal power distribution is all to well known : very little engagement, stifled innovation and creativity. What a waist of energy and talent!

And one of the best way to ensure everyone gets to be powerful is to have a more inspiring decision-making process.
As Frederic Laloux describes it, the pyramidal structures hinder fast and effective decision making. And does not always create the necessary level of engagement for decisions to be implemented swiftly.

In a pyramid structure, meetings are needed at every level to gather, package, filter, and transmit information as it flows up and down the chain of command. In self-managing structures, the need for these meetings falls away almost entirely. Meeting overload in traditional organizations is particularly acute the higher you go up the hierarchy
Decisions are naturally pushed up to the top, as it’s the only place where decisions and trade-offs can be informed from the various angles involved. It’s almost deterministic: with a pyramidal shape, people at the top of organizations will complain about meeting overload, while people below feel disempowered.” 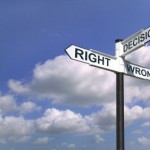 We often think that decisions can be made in only two general ways: either through hierarchical authority (someone calls the shots; many people might be frustrated, but at least things get done) or through consensus (everyone gets a say, but it’s often frustratingly slow and sometimes things get bogged down because no consensus can be reached).

I have discussed on this blog already some of the challenges with current decision making processes, and consensus in particular. Sadly, this is what we see all too often:

Consensus comes with another flaw. It dilutes responsibility. In many cases, nobody feels responsible for the final decision. The original proposer is often frustrated that the group watered down her idea beyond recognition; she might well be the last one to champion the decision made by the group. For that reason, many decisions never get implemented, or are done so only half-heartedly. If things don’t work out as planned, it’s unclear who is responsible for stepping in.”

What I like about Frederic Laloux’s book is that it gives several examples of successful implementation of more powerful decision making processes.  For instance, here is how decisions are made at Buurtzorg, one of the researched companies, situated in the Netherlands.

Let’s take a look, for instance, at a team meeting where important issues need to be resolved. With no boss in the room, no one can call the shots or make the final call. Instead, Buurtzorg teams use a very precise and efficient method for joint problem solving and decision-making. The group first chooses a facilitator for the meeting. The agenda of topics to be discussed is put together on the spot, based on what is present for team members at that moment in time. The facilitator is not to make any statements, suggestions, or decisions; she can only ask questions: “What is your proposal?” or “What is the rationale for your proposal?” All proposals are listed on a flipchart. In a second round, proposals are reviewed, improved, and refined. In a third round, proposals are put to a group decision. The basis for decision-making is not consensus. For a solution to be adopted, it is enough that nobody has a principled objection. A person cannot veto a decision because she feels another solution (for example, hers!) would have been preferable. The perfect solution that all would embrace wholeheartedly might not exist, and its pursuit could prove exhausting. As long as there is no principled objection, a solution will be adopted, with the understanding that it can be revisited at any time when new information is available.”

And there is also the advice process, which most of the researched companies follow in some shape or form.
Someone in charge of a project will have to seek the advice of as many stakeholders as possible to come to the best proposal (and later, decision) possible. Even the CEO could be one of the many consulted persons. The process is key to making self-management work on a large scale. People “higher up” could not simply overrule these decisions based on hierarchical position, because they would be « simply » one of the stakeholders whose opinion is sought. Sure, a CEO’s opinion may have bigger weight given his experience and position, but still, he would “only” be one of many. And would have no power to revert decisions made through the advice process.

Let’s have a look at it the benefits of the advice process as described in the book.

First, it draws people whose advice is sought into the question at hand. They learn about the issues and become knowledgeable critics or cheerleaders. The sharing of information reinforces the feeling of community. Each person whose advice is sought feels honored and needed. Second, asking for advice is an act of humility, which is one of the most important characteristics of a fun workplace. The act alone says, “I need you.” The decision maker and the adviser are pushed into a closer relationship. In my experience, this makes it nearly impossible for the decision maker to simply ignore advice. Third, making decisions is on-the-job education. Advice comes from people who have an understanding of the situation and care about the outcome. No other form of education or training can match this real-time experience. Fourth, chances of reaching the best decision are greater than under conventional top-down approaches. The decision maker has the advantage of being closer to the issue and … usually has to live with the consequences of the decision. Fifth, the process is just plain fun for the decision maker because it mirrors the joy found in playing team sports. … The advice process stimulates initiative and creativity, which are enhanced by wisdom from knowledgeable people elsewhere in the organization”

We looked in the first post of this series at the 3 breakthrough the Teal companies have achieved. And ensuring everyone gets to be powerful is most certainly the key success factor that can explain the spectacular outcomes of the pioneer organizations researched in the book “Reinventing Organizations”